Maybe you are new to Tae Kwon Do and Integrity Martial Arts or maybe you have been studying for a while. Either way, I thought I would cover a basic; the meaning of the Korean flag.

The Korean flag is called “Taeguk-ki”

The name for Korea in Korean is “Hangeuk”. You green belts will recognize this as your form is Hangeuk Form. The form is performed to the Korean National Anthem “Aeguk Ka.”

Just like our American flag, there is a theme to the Korean flag. The colors and shapes all have specific meanings. The main theme of the flag is that although there is constant movement within the sphere of infinity, there is also balance and harmony.

The flag consists of three parts: a white field (or background), a red and blue circle in the center of the flag (containing a “yin-yang” like symbol), and four black trigrams sorrounding the circle in each of the four corners of the flag.

The four black trigrams symbolize the idea of opposites and of balance. The trigrams
are:

Looking at symbols of the trigrams, you can see that they are opposites as well. Three unbroken bars (heaven) vs. three broken bars (earth), etc. Just so you can put it all together in a visual way, which is always helpful to me, wblow is a graphic for you to see it all  put together. 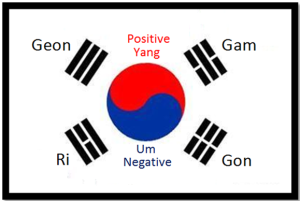