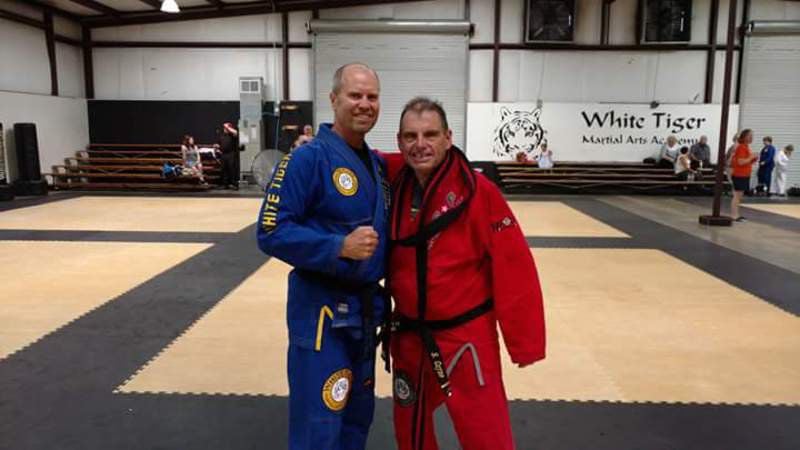 VALDOSTA — Steve Coyne took his grandson to martial arts class. He sat to the side, reading his Kindle. Then he asked himself a question.

“‘Why am I just sitting here? I could be doing this class.’” At 67, with no previous martial arts experience, Coyne signed up for a taekwondo class with his grandson at White Tiger Martial Arts Academy.

“It was just something special that you start and want to finish,” Coyne said.

Coyne was born outside of Boston and moved to South Georgia as a military member in 1988. He has maintained an active lifestyle, and has a background in endurance training through participating in 30 marathons. Once Coyne achieved black belt status, his wife Rosetta couldn’t have been any more proud.

“I’m impressed because it really does speak well to a person not giving up on things that require physical endurance, proper training, proper guidance,” she said. “They do a very good job at White Tiger that (Steve) consistently did what he needed to do to be safe, to be competitive to pass the measurement of what the black belt needs to measure.”

Coyne didn’t make it his mission to finish with a black belt until more than a year into his classes. But once his decision was made, he put in the necessary work to make it happen.

“It’s incredible for me, especially somebody his age, how hard he comes in and works,” said White Tiger chief instructor Mike Mason. “It brings everybody up watching him come in and work that hard. We all just love him and respect how he has bad knees, a bad back, he’s 67 years old but he never lets any of that get in his way.

“It’s so humbling to me to watch somebody do that. It shows what anybody can do once they put their mind to it. As his instructor, it just blows me away.”

Coyne found encouragement through his instructors and classmates. He started off training in the kids class with his grandson. He reviewed proper technique every day on White Tiger’s YouTube channel. He broke boards, first starting with plastic practice boards and worked his way to breaking wooden boards.

When it came time for Coyne to break his first wooden board, he was admittedly nervous.

“It seems counterintuitive that you would punch something and it wouldn’t hurt, but you work up through the practice boards and you get to do the real board,” he said.

He broke his first board with a front kick.

“It was the most amazing feeling. If you’re doing it right, you don’t even feel it,” Coyne said.

The Boston native eventually moved up to the adult class. He moved up to 2-on-1 sparring with some of the black belts. He took his share of hits, but gave some as well. He worked through the four forms to become black belt certified, consisting of 24 or more steps.

Twenty-year-old Court Shaw, who has been training at the academy since he was 13, was one of Coyne’s instructors at White Tiger. Shaw has watched Coyne’s progression from a white belt to a black belt.

“He was really dedicated, dedicated to the point where, at times, he was going out of town or something, he’d let us know way beforehand,” said instructor Court Shaw. “Let us know exactly when he’d be back. He would always make up testing or he would try to test early if he could.

“He trains all the time. He runs, he lifts and he’s always active. He’s always trying to find more time to get here and train. He’s a model student, really.”

Now a certified black belt in taekwondo, Coyne continues to volunteer with one of the kid classes.

“I wish I had taken this when I was in my teens or my early 20s, because it gives you kind of an inner peace,” Coyne said. “You can defend yourself and you can learn something. And that’s why Mike Mason has a lot of children in his class who benefit from the discipline.”

Coyne said he hasn’t decided if he wants to pursue his belt degree further but was leaning toward not advancing.

“To me, the black belt was most important, not what degree you were,” he said. “I’m kind of happy staying as a black belt. I may keep doing it, but will I try to keep any further along to a different degree? I don’t think so.”

As for taking on challenges outside of the martial arts realm, Coyne is “considering participating in the Bataan Memorial Death March, commemorating heroic service members who died during World War II’s Bataan Death March.