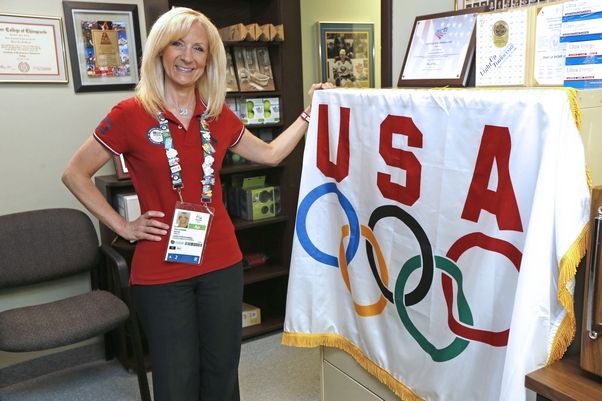 I found this article by

LEWISTON – Sherri LaShomb is awaiting delivery of her coveted 2016 Summer Olympics ring next month, but in the meantime, she has plenty of memories to reflect upon from her recent job in Rio de Janeiro as the athletic trainer and chiropractor to the USA Taekwondo team.

The owner of LaShomb Chiropractic Health and Fitness at 765 Center St., Lewiston, said the experience was “a huge honor.”

“I was blessed to be chosen for this and I will be forever grateful to the athletes for choosing me,” she added. “It was quite exciting to represent the U.S. – exciting and stressful at times, because I realized the enormity of what I was doing. I was responsible for our athletes and had to make sure they were all right to compete and help them work through injuries, if they had them.”

The task of helping athletes achieve their peak form to prepare for competition is something with which LaShomb has long been familiar.

A chiropractor since 1988 and a certified athletic trainer since 1997, LaShomb also has a chiropractic sports practitioner degree (1996) and worked as head athletic trainer/team chiropractor for the Buffalo Bandits professional lacrosse team, as well as the Buffalo Gladiators semipro football team. She also has served as an assistant adjunct faculty member at D’Youville College and said she is eager to get back in the classroom once her hectic travel schedule allows.

But first, she will travel to Lima, Peru, later this month as the athletic trainer and chiropractor for 42 athletes and accompanying coaches and staff for the USA Taekwondo Poomsae Team’s world championships. She said she will be the sole medical staff for this trip.

She also knows that if ever invited again, she would “absolutely” jump at the chance to work at the Olympics.

And she knows she will have the support of her patients and family.

“My husband, Carlos Pena, has been super patient and supportive of my traveling and my working with taekwondo,” LaShomb said of the retired professional soccer goalkeeper.

It’s been a long, intense road from the halls of Lewiston-Porter High School (Class of ’82) to the Rio Olympics, but LaShomb has earned many honors along the way. She was named Athletic Trainer of the Year by the National Lacrosse League; Outstanding Medical Staff by the USA Taekwondo; and Sports Doctor of the Year by the American Chiropractic Association’s Sports Council.

She currently serves as medical director of the National Collegiate Taekwondo Association, an organization which helped place her on the road to Rio.

LaShomb recently took a break from catching up on paperwork in her Lewiston office to chat before it was time to pack her bags once again.

Q: Taekwondo is a Korean martial art dating to 50 B.C. and has only been part of the Olympics since 2000. How did you get started with this sport, in particular?

A: I worked my first tournament for the National Collegiate Taekwondo Association in 2003, on more of a grass roots level. In 2004, I took my first international trip with them. I worked a lot of tournaments for many years and it just blossomed into something I really enjoy. I’ve slowly moved my way up.

Q: Did you know much about the sport before becoming involved at this level?

A: I had never trained in taekwondo and kept thinking I really wanted to take classes, so two years ago I started with Master Chong’s World Class Taekwondo and I’ve worked up to a blue belt. I enjoy the athletic side of it, but I wished I had started when I was younger because I’m not as flexible as I used to be! (laugh) I plan to keep it up, though, and in fact I want to get back to it next week.

Q: What are the injuries most commonly associated with this sport?

A: It is a combat sport, so acute injuries can and do happen. We’re always keenly aware of head injuries and make sure that if athletes do sustain them, they are evaluated and taken out of the competition when appropriate. Luckily, that doesn’t happen as often as it does in other sports, especially as the athletes become more experienced and have more control over their movements. We also see a lot of hand fractures, hip labral tears, ankle and knee sprains, and some dislocations.

Q: The U.S. had four taekwondo competitors in the Rio Olympics; Jackie Galloway, Paige McPherson, Stephen Lambert and Steven Lopez. Did you know them prior to working with them at the Olympics?

Q: And Jackie Galloway took home a bronze medal this year – that had to be a special moment. Please tell us about it.

A: Yes! I had a chance to sit with Jackie when she won – it was very exciting! Each athlete has a coach in one chair and medical staff in the other, ringside. There was only Dr. Christina Allen, of San Francisco, and me, so we each took two athletes to sit with, and I happened to sit ringside for Jackie. The U.S. has had at least one medal in every Olympics (in taekwondo) and our competitions were held at the end, so there was pressure on Jackie.

Ringside, I would make sure the athlete had a drink of water, or ice, or a cold towel – every athlete has a routine of his or her own. That’s part of my responsibilities. And, if I’m called to the floor, I have just one minute to assess the athlete. Those are the rules in taekwondo.

Q: And Rio wasn’t your first Olympic experience, because you were at the 1996 Summer Olympics in Atlanta and the 2002 Winter Olympics in Utah, right?

A: I first volunteered as a chiropractor for the 1996 Summer Olympics in Atlanta. The International Federation of Sports Chiropractors set up a clinic there for any athlete from any country and any sport to get chiropractic care because it wasn’t offered in the Olympic Village at that time. It was a much different experience than Rio, where chiropractic is now offered along with massage therapy, dentistry, orthopedics – even X-rays are available now as part of the poly-clinic in the Olympic Village. We’ve come a long way.

Q: Tell us more about your Rio Olympic experience.

A: It was just a great experience. We flew to Houston first for team processing and were fitted for all of our Olympic gear. Ralph Lauren Polo had stylists and seamstresses there to make sure everything fit perfectly for the closing ceremonies. We were treated like rock stars. Then we went into the Nike dressing rooms and you see your name hologrammed on the mirror. We were given Oakley sunglasses and they sized us for our Olympic rings. It was really pretty cool.

We stayed over and then we had an 11-hour flight to Rio, arriving Aug. 4. Opening ceremonies were Aug. 5. Our competition was at the end, Aug. 19 and 20, so we started training Aug. 6 and had double sessions every day. I didn’t have a chance to do an awful lot, because I was on call 24/7, but I did see the women’s fencing competition when we took the bronze medal (saber team) and the women’s USA water polo, which led to the gold medal.

Q: Were you particularly hit with a wave of patriotism at the closing ceremonies?

A: Yes, I was very fortunate to walk in the closing ceremonies. Unfortunately, it rained the entire day, but I got my picture taken with the U.S. flag-bearer – (gymnast) Simone Biles.

Q: Did you ever imagine as a young student that you would one day serve in the Olympics?

A: I was at Ithaca College studying physical therapy and I hurt my back running. I came home and my grandmother took me to her chiropractor. I didn’t even know what one was, but I knew right away after I went, that this was what I wanted to do. I transferred from Ithaca to the Palmer College of Chiropractic in Davenport, Iowa, and graduated with my doctorate in 1988.

I always knew I wanted to incorporate athletics into my work. I’ve been an Olympics junkie forever! And I have always been a huge sports fan – since I was old enough to watch TV, I’ve watched the Sabres and Bills. So this was a natural fit.