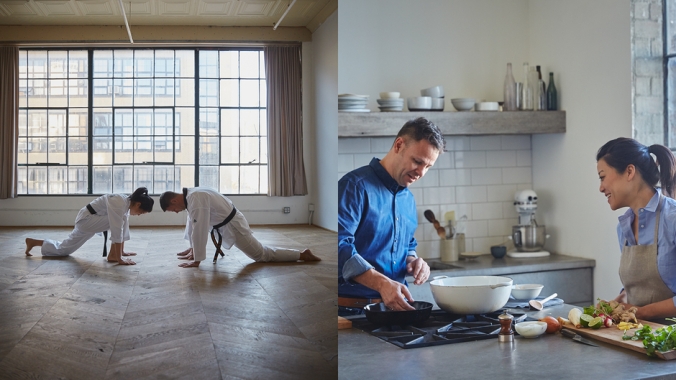 Crack, Crack. Cathal Armstrong unleashes a series of roundhouse kicks onto leather paddles held by Master Jason Yoo, his tae kwon do coach. His legs snap in rapid-fire sequence, high and low, striking powerfully where his opponent’s head and torso would be. Pop, crack, crack.

He shifts to bouncing lightly on his feet, his fists raised yet relaxed. Behind him comes Kay Chun, driving alternating side kicks into Master Yoo’s paddles.Thump. Step. Thump. Step.

Armstrong circles back around. He launches himself into the air in a whirling 360-degree spin, his legs whip, then his instep smacks right through one of the paddles. Pow.

Armstrong and Chun have never met before, but  F&W has brought them together for a tae kwon do training session followed by a bit of cooking. Armstrong was named an  F&W Best New Chef in 2006 for his refined Irish-French cooking at Restaurant Eve in Alexandria, Virginia; Chun is an F&W Test Kitchen senior editor. As they talk, it becomes clear that despite their common interests, their journeys to this moment have been remarkably different.

For Armstrong, tae kwon do came as a midlife lifesaver. Entering his 40s and pushing 241 pounds, he found himself struggling with the demands of his growing restaurant empire. The stress and grueling physical nature of the work left him unable to control his temper in the kitchen. “My life felt like a bicycle with a loose wheel,” he says. “I was so out of shape, I’d drop my pen in the kitchen and couldn’t even bend down or crouch to pick it up. It was exhausting, that’d make me cranky and then I was just yelling at everyone all the time.”

The turning point came seven years ago, when his dad came to visit from Dublin. “He said, ‘Oh, my God, what happened to you?’” Armstrong recalls as he pulls up a cell phone photo of himself from around that time. It’s almost impossible to reconcile that image with the martial artist standing next to us today, a second-degree black belt who has twice won the national championships and once the US Open in his middleweight age class. It’s an impressive transformation, the result of a wholesale lifestyle change that includes eating smarter.

For Chun, there was no transformative moment. The daughter of the celebrated grand master Richard Chun, she was immersed in rigorous tae kwon do training from the age of five. Her father has taught legends like Muhammad Ali and was tapped to play Mr. Miyagi in The Karate Kid; unwilling to spend months in Hollywood away from his family, he turned the part down and helped train the film’s star, Ralph Macchio, instead.

As a child, Chun and her brother would commute with their father on Saturday mornings from New Jersey to his dojo on Manhattan’s Upper East Side. They’d help him prep the academy for the day’s classes, train all day and then wash the gym down at night. “It kind of sucked at the time, but I look back now and see it instilled in me something I wasn’t aware of then,” Chun says.

“With tae kwon do training, I learned to relax, to process more information at once,” Armstrong says. “I had a similar awakening in the kitchen.”

That something is a meticulous, disciplined approach to everything she undertakes. From learning how to do a particular kick to dicing an onion, she’s able to focus her mind on a physical task, repeating it over and over while honing the smallest details, a process that leads—in micro steps and plateaus—to mastery.

After taking a few minutes to cool down, Armstrong and Chun exchange their tae kwon do uniforms for aprons and make their way to the kitchen. Each has come with a few favorite pre- and post-workout recipes to share, and the similarity in their approaches is striking. They start by cooking Armstrong’s snapper with dashi broth. They crisp the fish skin side down and simmer kombu and bonito flakes in water to create the savory Japanese stock. “I’m cooking with a lot more Asian ingredients than I used to,” Armstrong muses. “The Asian lifestyle in general just seems to be healthier.” Chun agrees, thinking back to the Korean food she grew up eating and the way it still influences her cooking: “At home we ate just a little meat and then all these vegetables.”

Armstrong drizzles a creamy lime-spiked doenjang dressing around his snapper, adding funky depth and a pop of acidity, while Chun spoons a gingery vinaigrette onto poached chicken that’s so dense with herbs it’s practically a salad. It’s no accident both have chosen zingy vinaigrettes as their sauces. This is wholesome, clean, delicious cooking, the kind that leaves you sated yet energized.

There’s an easy calm as they work, which Armstrong says is now the norm in his restaurant kitchens. “When I started competing, I’d step into the ring and only see the fighter right in front of my eyes. With training, I learned to relax a little bit, see what’s happening around me and process more information at once. It makes everything clearer; I can think better,” he says. “I had a similar awakening in the kitchen. A cook can hunch over and not worry about the rest of the world, but a chef needs to be able to look up and see everything.”

Cultivating that mental clarity is what allows martial artists and chefs to perform at their best. Getting bogged down in distracting minutiae—whether about the scary number of dinner orders flying in at once or the flurry of punches hurtling toward your face—is the surest way to lose control. “The minute a thought comes into your mind, the rhythm and focus are gone, and then it’s all over,” Chun says. “The only thing you should be thinking about is letting your body go through its motions.”

That concept is called mindfulness or flow or even being in the zone. No matter the terminology, what’s important is the effect it describes. Before, when Armstrong’s pen would roll off the kitchen counter, he’d have to ask one of his cooks to pick it up for him. These days he’s more likely to snatch it in midair before he has even realized it’s falling, and it never hits the floor.

Daniel Gritzer is culinary director at Serious Eats, a former F&W editor and an instructor of the Afro-Brazilian martial art capoeira.