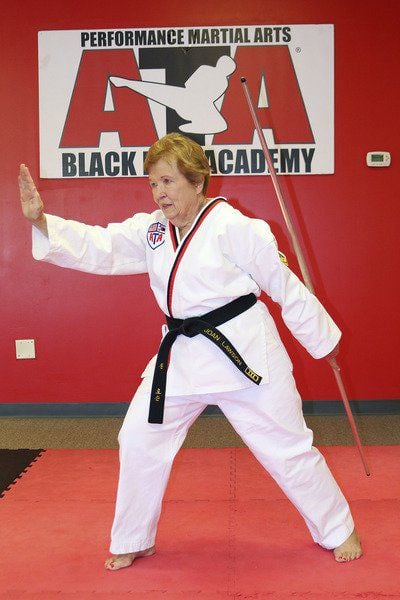 VALDOSTA — Age is only a number.

Just ask Pat Hodges and Joan Lawson, a pair of seniors and third-degree black belts within the American Taekwondo Association.

Lawson, 80, began taking classes at Performance Martial Arts Academy 12 years ago upon a friend’s invitation to attend a class.

“I exercised at the Y and another friend has moved, and I didn’t have anybody to exercise with, and I thought, this would be a good group activity,” Lawson said.

“I came and, the little story is, I did a block or something, and Mr. Church says, ‘Ms. Hodges, that was perfect,’” Hodges, 75, said with a smile. “So, I go home and my husband said, ‘Are you going back?’ and I said, ‘Are you kidding me, that’s the first man that’s ever told me I was perfect.’”

Both women are cancer survivors twice over (Hodges, a stage 4 melanoma; Lawson, breast cancer), so it shouldn’t come as a surprise to see them defying expectations of women their age.

Lawson has friends that try to stay in shape with yoga and other programs offered at the YMCA. She can’t think of any other friends that have deferred to martial arts as a form of exercise.

But for Lawson and Hodges, that’s exactly what taekwondo has become, and both will testify to its benefits and the reassurance Church provides them.

“At my age, balance is very important,” Lawson said. “I’ve had several near falls that I think might have been different if hadn’t been doing this.”

Hodges added: “The flexibility and the strength is really the main thing. It’s good for the body, mind and spirit, and Master Church is so encouraging. He really does encourage us and makes us think we’re great.”

Lawson and Hodges train four days a week in 45-minute sessions, twice in the morning and twice in the afternoon.

Church hasn’t held back on the duo either. They have to perform the same fitness tests in rank testing as every other student at the studio, and Church admitted they regularly outclass some of his other pupils.

“You look at these ladies, they’re so humble and sweet, then they get out there and they’re kicking these darn pads hard and they’re punching,” Church said. “I’m like, ‘Dagum.’ They do really well.”

Although Lawson and Hodges have been dedicated students for more than a decade, neither has much interest in the competition aspect.

Both focus on training and taekwondo’s benefits to their physical fitness, but when Church asks nicely, he has convinced Lawson and Hodges to show their mettle.

“They’re both very good,” Church said. “It’s a blessing for me. They’re so good and they’re very humble. You’ll never meet more humble women. They don’t understand how good they really are.

“I beg them, i’ve been pleading, ‘Come on, go to these tournaments,’ because they could be world champions. But every body takes taekwondo for different reasons.”

Hodges said she was petrified in her first competition, and Lawson said she once forgot her form midway through.

But both women have also had their share of competition highlights, including a sparring match against a world champion four years ago at a competition held at The Complex at Valdosta State. Hodges won her bout.

Church has once again convinced two of his star pupils to compete at an American Taekwondo Association event at the Rainwater Conference Center on Oct. 7.

Lawson and Hodges will appease their teacher, then they’ll go right back to training for a different cause.

“That’s the cool thing about taekwondo,” Church said. “There’s a place for everybody. Some people like tournaments, some people do it for the physical fitness, the discipline, the structure, whatever it may be.”

Derrick Davis is the sports editor at the Valdosta Daily Times.